Let us fix our eyes on Jesus
the author and perfecter of our faith,
who for the joy set before him
endured the cross, scorning the shame.
Hebrews 12:2

Shame is that terrible, private feeling that something is wrong with us—that we are somehow defective as a person. That we are irreparably damaged. That if anyone really knew what we were like we would be rejected.

A part of the experience of shame is the fear of being found out and exposed. We want to run and hide and protect ourselves from exposure to other people’s judgment.

Many of us start accumulating shame in childhood. Sometimes the roots of shame involve abuse, neglect or significant trauma. But shame can also be rooted in less intense experiences. Shame can be created if a child is told she is irresponsible or stupid when he spills his milk or brings home grades that don’t meet a parent’s expectations. Rather than being taught how to clean up the spilled milk, or helped in ways that might allow for greater success in school, a kind of character assassination takes place which leaves a child believing terrible things about herself.

Shame can also be formed when a child’s basic needs for secure attachment, nurture and attention are chronically unmet. When our longings for relatedness are not met, the basic human need to love and to be loved can feel shameful to us.

Unfortunately, accumulated shame does not just go away as time passes. Unless it is addressed directly, we carry shame with us. Sometimes it may seem dormant, but in times of stress our shame can float to the surface of our lives and complicate things. For example, a diagnosis of a serious illness can be a trigger for feelings of shame. Being told “something is seriously wrong with you” can feel very much like the old shaming message of “you are defective” or “you can’t do anything right.” And when a serious diagnosis is public information we can feel very vulnerable and exposed. As a result it can be difficult to sort out our responses to the current crisis from our responses to old, accumulated shame.

The good news is that anytime shame surfaces there is an opportunity to experience healing of the experiences and beliefs that have fed the shame.

When Jesus faced death by crucifixion, we are told that he “endured the cross and scorned the shame” (Hebrews 12:2), Jesus endured the pain. That is, Jesus did not avoid the suffering, but instead, he went through the suffering. But he rejected the shame. All the shame that others were attempting to heap on him had no power over him. Jesus did not accept the shame others were trying to put on him. He was being treated as a person with little or no value. But the message of shame, “you have little or no value,” was a lie and Jesus refused to accept it.

We tend to do the opposite of what Jesus did when faced with suffering. Jesus accepted suffering and rejected shame. We tend to reject the suffering—we deny it, run from it, tune it out—but we tend to embrace the shame as if it were the truth. Shame, however, is a lie. None of us is ever “less than.” None of us are unlovable, beyond repair, or worthless. We are loved and cherished by a redeeming, healing, saving God. And none of us is in the wrong for longing for love and connection. This longing, although it may be painful at times, is a gift from God. It is a gift that keeps us moving toward relationship with God and with each other.

I experienced moments of shame for having breast cancer. I had feelings of being somehow “less than” women who did not have breast cancer. I had thoughts of being “marked” and “unlucky” and inferior because of this diagnosis.
When I remembered the women I know who are breast cancer survivors I could see that I was being entirely irrational. These women are some of the most beautiful humans I know.

Years earlier I had decided to practice an unusual “giving up” for the Lenten season. In some traditions it is common to make some kind of personal sacrifice in the weeks leading up to Easter that will help keep us mindful of Christ’s sacrifice. I had given up desserts and chocolate on previous years. But this time I decided instead to give up my fear and shame. My sons were young at the time, and when I talked at the dinner table about my plan they asked, “You aren’t going to feel any fear or shame for seven weeks?” I told them that was not my plan. I expected to continue feeling fear and shame. My plan was to stay aware of these feelings and to do my best to release them to God as soon as I was aware of them. I wasn’t planning on examining them and analyzing them. I simply was going to tell God, “I am feeling fear or shame, and I release these feelings to you.”

I did this practice of letting go of fear and shame for seven weeks. It changed something in me. Of course, I still experience these feelings, but I am more aware of them, and I can release them more readily.

When our family went to family week at the addiction treatment center where our son was being treated, they taught us to discard shame using a physical gesture of throwing our hands in the air and saying, “I release this shame, this shame does not belong to me.” This was close to what I had done for seven weeks. Sometimes I did this outwardly with a physical gesture. Sometimes I did it inwardly. A physical gesture such as this, which symbolizes the release of shame, can be a powerful way to reinforce our growing willingness to let go of shame.

Letting go of shame is important because shame leads only to destructive places. Shame keeps us focused on how bad we feel about ourselves, and thus less aware and open to others. Shame keeps us immobilized because it is based in the belief that we are hopelessly beyond help. Shame pushes us to isolate because we feel too exposed. Shame feels so terrible that it opens the door to rage. We cannot stand to feel so terrible so we lash out at ourselves and we lash out at others.

When hard times come, feelings of shame often surface—feelings of being worthless and unlovable. We can let these feelings go. They do not belong to us. We are valued. We are loved.

When you don’t know what to do…let go of shame.

1. What shame are you feeling in relation to the difficulty you are experiencing?

2. What other shame are you aware of?

3. Practice letting go of shame, throwing your hands in the air and saying, “This shame does not belong to me.”

4. Ask God to help you reject the shame you feel and to be open in new ways of resting in God’s love. 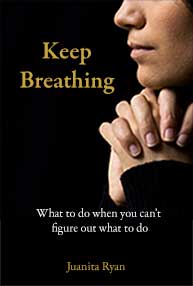 "I think the reason we sometimes experience joy after the expression of gratitude and grief is that expressions of gratitude and expressions of grief both ground us in the truth and open our hearts. Gratitude and grief are both vulnerable states. They are states of grace. They are moments when we let down our defenses a bit, when we soften, when we are receptive to God’s tender mercies in ways that might not be possible in the more ordinary moments of life."
Juanita Ryan